It has been a little quiet on the blog front, but I have been doing some gaming, if you follow my Twitter feed. A short break from some Warhammer playing comes to an end this weekend when I travel to Toledo, Ohio for a 1500 point tournament at the Toledo Game Room. The rules are simple, no Lords and no Special Characters. I am taking what I think to be a strong Skaven list at that point level, though it is hard to build what I think is a strong Skaven list at sub-2000 points with no Lords.

In my absence from blogging I have been putting time in with my new game, Malifaux. My wife and I started new crews and are waiting for our bases to arrive from Dragonforge. Her Rasputina crew are to be based on ice bases, and my Seamus crew on cobblestone bases. I have also been working on my new character for my upcoming D&D campaign, a Dwarf 'Slayer' (actually the Ranger class) with dual battle axes. I love the character, and he will of course be played like I envision any good Slayer to be, as Gotrek from Gotrek and Felix. Here are some shots of the model. 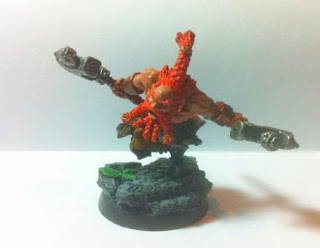 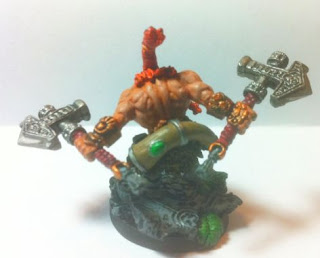