Blood in the Sun Tournament report

I am back with Blood in the Sun with tales of triumph and pictures of the carnage that was my first 2 day GT. Over 50 players were at the event and when the dust settled I scored 3rd place on Battle points and 7th place in the Overall Standings. Lets take a look at how things went down.

Starting off Friday night, I decided to play a practice game with Jake Murphy who I met at Adepticon and frequently hit up on Twitter. Jake was playing his Brettonians and we decided to have a tune-up game and a few beers. 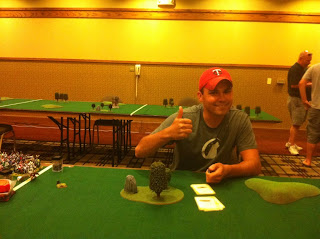 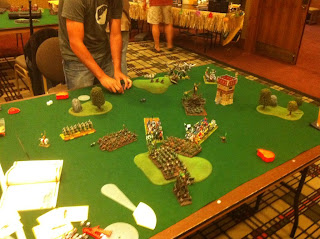 This was a great game for me in the grand scheme of things, because I tried a few risks and tactics that almost led to utter catastrophe. My 2 Grey Seers and BSB had both moved into a Slave unit late in the game to avoid a Knight unit, then were caught with an 11" needed roll charge and popped... destroying all 3 characters. The Skaven squeeked by in the end because of the amount of damage my magic had done throughout the game but I definitely would say my success on the weekend was helped by the little scare I had Friday night.

To start off the Tournament itself, I was told by Grant (the organizer) I had drawn his pick to win the entire tournament! As it turns out he could have been right. Alex Nikitenko was a great opponent. He was on table 1 during round 4 of the Adepticon Championships and lost to the Daemon player who won overall. In our game he was playing Orcs and Goblins. 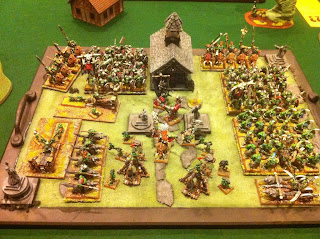 The first scenario was a straight pitched battle. The game was hard fought and the shooting advantage was going his way early. A failed charge by my Abom on my second turn let him get flanked and killed when he was run down, and things were looking grim for the rats. The Foot of Gork had also stomped me into the dust 3 times on the first turn. 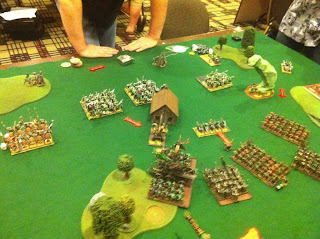 Poor maneuvering led my Plague Furnace through the woods after that, reducing it to only 1 wound... but the Orc war machines could never finish it off. Then, a well targeted 13th spell finished off the Savage Orcs holding his army general to put me well ahead. Late in the game another savage beating by the Foot of Gork killed off another unit as well as my second Grey Seer, and I limped to a 11-9 victory.

Game 2 I moved up to table 10 to face Michael Groth's Beastmen. He had a very foot troop heavy list that relied on boosting his hordes and winning through attrition. Our second scenario was more or less a pitched battle as well. 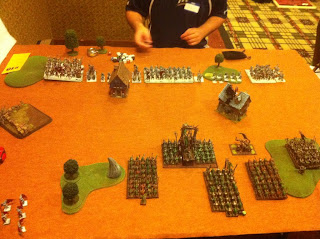 I moved forward and was aggressive with magic early, using Plague and Scorch to hurt his units and panic the ones on the outside edge. The Plague furnace smashed into his 40 man Gor herd and eventually destroyed though unit though I lost almost all of my Monks. It was worth it in the end and as I finished off all of his characters, I kept mine away from trouble to take the big 19-1 win. 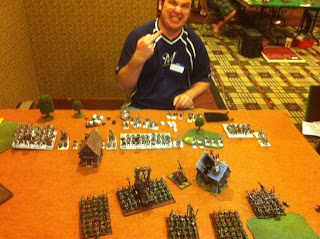 IRL Beastman!
Game 3 I played Jeff Heck and Beastmen again, but a much different list. The Gor horde was there, but also included instead of Bestigor were a large Minotaur unit led by a Doombull and Mino BSB, as well as a nice Ghorgon represented by the huge model from Banebeasts. 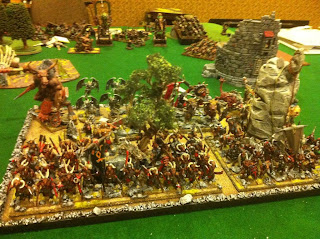 The scenario was Blood and Glory, and the Beastmen went first, RUSHING across the board. This was definitely a great strategy because I could barely hold him off. He also used a magic item that forced me to roll a 4+ to shoot my cannon, saving his minotaurs. Even when I got my furnace horde into his Gor horde, his Great Shaman irresistably cast Transformation of Khadon and turned into a Great Fire Dragon, eating a good majority of Plague Monks, also rolling double 6 for his breath attack. 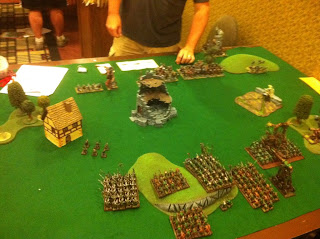 I did my best to hold up units and use magic on others, but in the end I kept it close enough that on his 5th turn the game turned for me. The Great Shaman, another Shaman, and a Hero were all that were left of the horde vs a few plague monks and my furnace. Attempting Transformation again, Jeff rolled irresistably and Dimensional Cascaded his Great Shaman and the resulting explosion killed the Shaman and Hero as well, scoring me about 600 points and the victory in my final game of day 1 with 11-9 points.

That night was a blast as I relaxed and did some recording with the Garagehammer crew. I assume it will be on their next episode along with their BitS coverage. The Pointhammered guys were there as well and did some "Cross-Podcast" banter for the show. 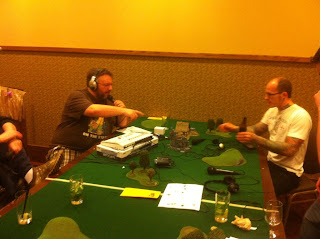 Day 2 came after a night of much drinking and Warhammer debauchery. I found out the night before that I would be facing a mostly mono-Khorne Daemon player named Dan Ruud on table 4 again. He also had a Loremaster Tzeentch caster with Haevens magic. 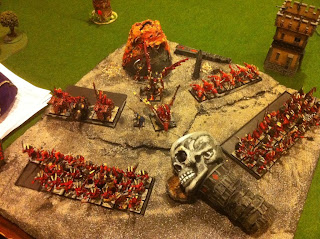 With the scenario being a Meeting Engagement type deployment, I knew I would have 2 hordes of Bloodletters, a Bloodthirster, and a big unit of Flesh Hounds in my face EARLY. LUCKILY I got the first turn. Because he was so eager and deployed on the front line, my opponent left his rear completely open and his lone heavens loremaster hiding behind a building. My Gutter Runners took advantage of this and Scouted behind him and killed him with poison slings on the first turn. 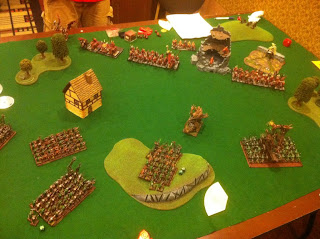 I attacked the right flank hard with my magic, Abomination, and Plague Monks. The Plague Banner is an amazing item and, while they do serious damage back, kills a lot of Bloodletters. A failed 7 inch charge on 3d6 left my HPA to be flanked by the Flesh Hounds, but it smashed them over the course of the game. Early on I sniped the Bloodthirster with my WLC, but my opponent used his BitS re-roll token to pass his ward save and save his life. He was mostly hiding him from then on, but he killed a lone Grey Seer at the end. I was able to pull out a solid victory after killing averything on the table other than his Bloodthister and Bloodcrusher unit. 16-4.

The final game of the tournament I was yet again on table 4 vs Kevin Bruins' High Elves. 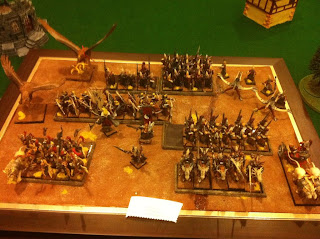 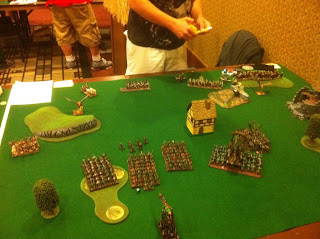 Kevin made a fatal error in deployment by leaving his level 4 General and Shadow mage outside of any units, hoping to use 4+ 'Look Out Sir' rolls on them and keep them mobile. I moved forward immediatly with the first turn and vaporized him with the Dreaded 13th spell and left a single Clan Rat in his midst. From there on I moved the furnace forward and controlled the board. He came on late to earn a few points back and held me off from finishing a couple large point units in the end earning me a 15-5 victory and an undefeated record at Blood in the Sun.

It was a great experience but in reflection I think I could have played much better. I didn't pay enough attention to objective points and it cost me dearly. I scored third place on battle points, and if I had payed more attention and scored 5 more objectives throughout the other 4 games of the tournament, I would have won Best General! I did finish 7th overall with poor composition scores, but very good sportsmanship scores. My painting scores were good but nowhere near the top scores. There were some amazing armies.


Final tournament results were Brettonians as Overall Champions, and Beastmen as Best General.

I had a blast and I am looking forward to my next GT: Core Comp in September!
Posted by Rhellion at 2:28 PM