After sifting through conversion threads, new models popping up online, and arguing on Bolter and Chainsword over "counts-as" Thunderwolf Cavalry options, this is what I feel like my options for modeling Thunderwolf Cavalry are. I've graded them on how much I like the ideas, but please, put in your input or even link to what you've done.

I specifically do not like the idea of "counts-as" suped up bikes, or 4 Wulfen on a 60mm base, or 2 Fenrisian Wolves leading a Grey Hunter or whatever on a 60mm base. Those aren't giant beasts, they aren't cavalry, and I don't think they warrant the stats of the TWC.

So here are what I've browsed the last few days: 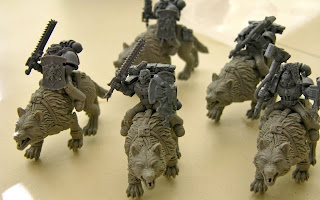 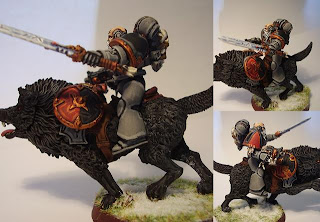 3. Circle of Orbos wolves from Warmachine (I think). Cool models, I've seen them in person. They come in 3 poses, but seem just a little small. Probability: moderate. 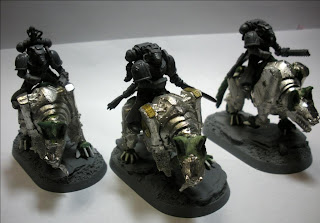 4. IamJacks over at 40k Fight Club has some nice conversions using Juggernauts. I like them, but I think I'd rather them be more wolf-like. Probability: moderate. 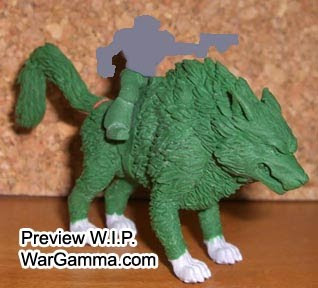 5. New sculpts that are being released this weekend. More resin, and they seem to be just about the size of Canis and Fangir, maybe a little smaller. There are 5 poses (the other 4 are being finished this weekend I've been told). Probability: very high.


So what do you think? I like the Russian EBay sculpts, but I am leaning towards the last choice. I think the decision will be made if the other 4 are good looking.
Posted by Rhellion at 11:34 AM