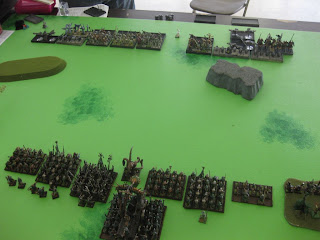 This past Saturday I played my second round Great Lakes Warhammer League game. The game was decided on the second turn when the Grey Seer conjured a great crack in the playing field that swallowed the Vampire Lord. But otherwise, the game was hard fought and well played.

Mike's Blood Knights ran rampant from unit to unit, while on the other end of the table my Plague Monks and Furnace were wrecking the undead in combat with it. My spies were picked off easily and early, while Mike's waltzed across the table.

When the smoke cleared, the only models on the table were Mike's 3 spies, all in his deployment zone. My Doomwheel raced across the table with two chances to take them out. The first (fifth) turn, I rolled a total of 5" on my movement roll. The second I got to them... and miss-fired! The game ended as his spies escaped, but his army did not.

Thanks to Mike for a hard fought game. We had some rules queries, but we worked them out in game genuinely, and without argument. The Skaven book as written leads to them inevitably. Thanks again Mike.

3 opponents left in the League. Orks, Orks again, and Warriors of Chaos! 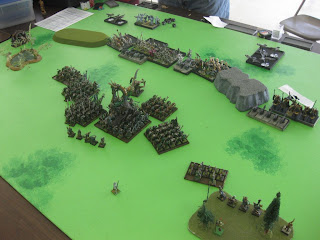 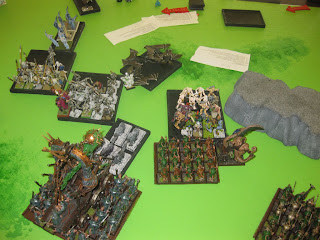 -right before the Vampire Lord (mounted in purple robes) is hit by Crack's Call (and rolled a 6 on his initiative)
Posted by Rhellion at 7:21 AM