I forgot to take pictures with this game! I played Russ's Orcs and Goblins, who I played in my League tune-up game a couple months ago. The scenario we played tonight was called Harbingers of Doom, which involved 3 additional, individual models who were sort of "suicide bombers" that we could detonate during any shooting phase, or had a chance to explode if killed before being detonated.

It's hard to defend the Hell Pit Abomination after his killer performance tonight. While he DID flank charge, he then ate through a unit of big 'uns with an Orc Warboss, and then another full unit of Black Orcs in two turns... it helped my cause that Russ couldn't pass a single save the entire game, and even started poorly with his first 5 dice rolls of the game all being 1's (including animosity). It was a rough game for Russ, because the dice were not on his side by any means.

I ended up winning the game after wiping out the Orcs and Goblins, while only losing half of the Giant Rat squad. Skaven win 3049 to 23.

2 games remaining in the 2010 Great Lakes Warhammer League: Orcs and Goblins again, and Warriors of Chaos. 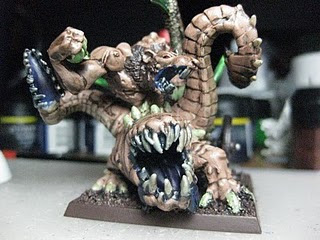