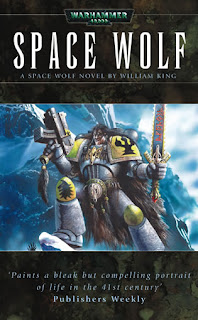 I finished reading Space Wolf yesterday, the story of Ragnar's induction into the Space Wolves Chapter. I have to say, it was a pleasant surprise after reading the first 2 Ultramarines books about Uriel Ventris. It was damn good! The book starts off with Ragnar Thunderfist as a member of one of the many tribes of Fenris. After a great tribal battle, Ragnar is selected by a Wolf Priest to join the Space Wolves through the many trials a recruit faces before being allowed to join the Chapter. You follow young Ragnar as he takes the path from tribal warrior, to recruit undergoing the trials, to the transformation into a Space Marine, and to a Blood Claw of the Space Wolves and his first mission. The action in this book is pretty exciting and draws you in like a good story should. I'd recommend it in a second.

I have to say, it really inspired me to include Blood Claws in my Space Wolf army lists. I also want to get some Wulfen models from Globalsmack. Sure to be able to run the Apocalypse Formation or a model here or there with the mark. But after reading the book, the actual roleplaying/story elements of these units really stand out for me.


Following up on my 2010 Painting Resolution, I've posted a poll for next month's project! Only a few days away from March. I found the Grey Hunter I was missing (he was hiding in plain sight), so I am ready to finish up my February entry this weekend just in time to start March's entry over Spring Break.
Posted by Rhellion at 7:47 AM