Game 1 has arrived, and I did get everything painted on time! Gargunki's Lizardmen were also finished, and on Tuesday we set about to settle to score between Lustria's most hated enemies. My Skaven army is meant to have a Lustria / Clan Pestilense theme, so it is very heavy on the green gloaks and next period the Storm Vermin will also be darker shades of camo green. 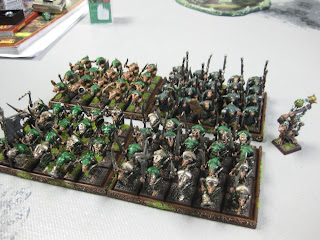 My period 1 army (minus the Plague Censer Bearers) 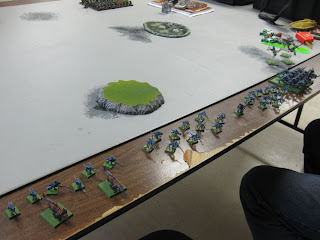 We deployed our armies before I remembered the missing Plague Censer Bearers (and then re-deployed). Gargunki rolled the first turn and began his advance. Turn one was mainly movement and positioning, and his Terradon's racing down my flank. 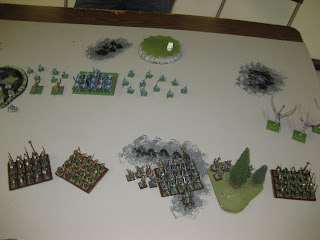 At the start of turn 2, I activated the Storm Banner and grounded the Terradons. During the magic phase, the slimy Skink shaman was able to wipe out 4 of 5 Censer's in the center of my army. Otherwise the Lizardmen were inactive. The unit of Plague Censer Bearers declared a charge on the Terradon's, and they had to hold for fear of fleeing off the table due to the charge angle. The Storm Banner ran out after only 1 turn. The unit of Skinks flee from a Plague Monk charge, while the Censer Bearers inflict toughness test wounds on the Terradons before smashing them with flails. 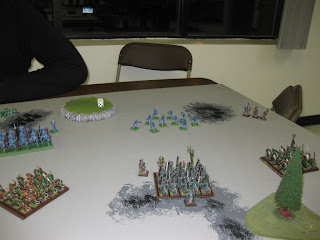 During turn 3, the Skinks continue to flee, obviously fearful of the vicious Plague Monks. The Saurus charge the Skaven Slaves, as I was hoping to set up a tactical charge next turn by exposing their flanks. The slimy Skink Shaman again blasts my Plague Censer Bearer's, but this time on the other flank, gaining vengeance for his Terradon riding brothers and killing 3 of 5 crazed Skaven. In a volley of Skink blowpipe shooting, and devastating Salamader raining fire, the Clan Rats are broken of their resolve and flee after taking almost 50% losses. The Slaves are broken in a close combat massacre and scatter, removing a viable charge in my turn. The lone, crazed PCB charges the large unit, and manages to kill 2 Saurus before dying off. 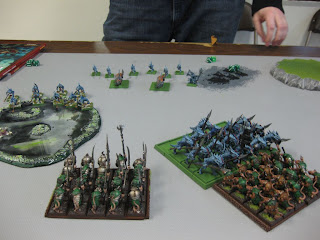 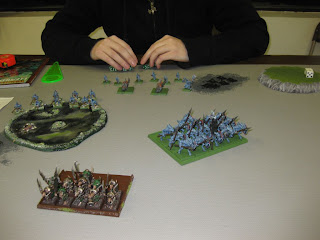 During turn 4 the Skinks rally and stand firm, preparing for the oncoming rat men. The Plague Priest's magical prowess is enough to dispel Forked Lightning the third time, saving my last Plague Censer. But it can't save the Plague Monks, who are then torched by Salamander fire, killing 6. The lone Censer charges the Skinks unit on the brink of the battlefield and their stand and shoot reaction BARELY kills him. One die roll on one remaining shot takes him down. "I hit you in da eye!!!" But then the charging Plague Monks, led by their frenzied Plague Priest, maul the Saurus Warriors in combat, forcing them to break rank and flee. The fear of seeing their much larger cousins run from the plague rats also cause the near-by Skinks to flee from the battlefield, and the Skink Priest also flees towards his table edge. 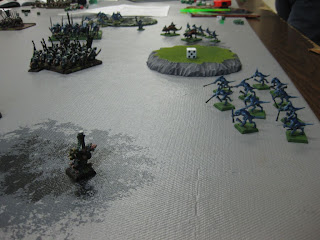 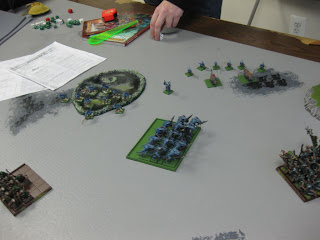 In turn 5, all Lizards rally. The Saurus get charged again and lose, but are more sound in their resolve and do not flee. On the other end of the battle, the Skinks are charged by the Clan Rats who spent the game moving and manuevering. They are beaten in combat and flee, but rally for the final turn. 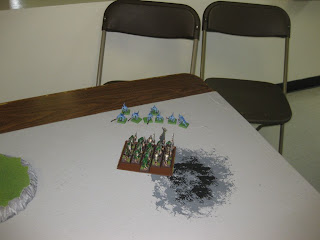 Final Turn! The Salamanders try to aid their Skink handlers, but fall short for the first time all game and cannot reach the Clan Rats with their fire. The Plague Priest again holds sway over the forces of magic, and is able to dispel the possibly disastrous forked lightning. Unable to be slowed, the Skaven Clan Rats charge the Skinks, and drive them off the board as they pursue them off as well... unable to claim the board quarter! 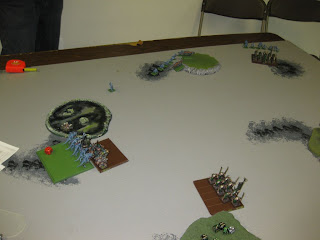 Here are the standings after period 1. Next game is vs the Chaos Dwarfs!