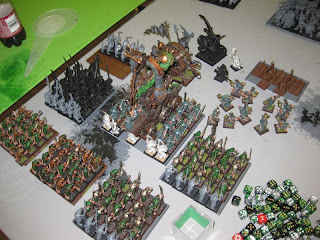 Picture of the new Skaven in action.

No solid updates, as I haven't had my marathon session of painting yet. But in new model news, I picked up 40 new Clan Rats on the sprue in the used bin for $18! I also got a new model used Doomwheel with a broken banner for $18. I'm thinking of building them as another 20 in number Slave unit, and another 30 strong Clan Rat unit (with the random 10 in the picture above) for either a 13th Spell pool of rats, or as a non-Storm Vermin option to push a Screaming Bell. Hand weapons and shields, because imo spears are worthless on a Bell unit... only 4 models will be on the front facing other than the Bell itself.

We also finished up our short and small Combat Patrol league games this week. I ended up going 4-1 overall, with my last game against Space Marines. My oponnent played perfectly to his strengths and my weaknesses to be agressive and wittle my already small numbers down. I probably should have changed the list up a bit after the last few games! Unsure how I did overall in the standings, but the league was fun as a short filler before our next big 40k league/campaign.