Veteran Sergeant Learchus looked at the horizon anxiously. "Keep a look out Marines, I can smell the xenos from here, the Eldar can't be far. Sergeant Daceus, take your squad over that ridge to secure the bunker. Cleander, take your Combat Squad to meet them at..." 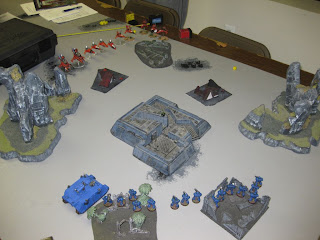 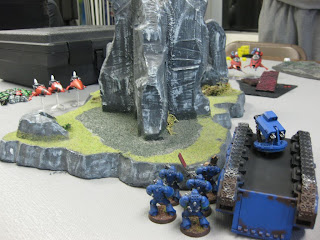 The Razorback that Sergeant Learchus was commanding his patrol in exploded from missile fire. He climbed from the wreckage and pulled another brother-marine from beside him. The other 3 power armor clad giants climbed out as the took cover.

"Get behind that rock!", shouted Learchus, "Daceus, take cover in those ruins, Cleander take your squad to the bunker!" The Eldar were visible now, screaming towards them on their Jetbikes. Volleys of shuriken catapults pinned them down.

"They are trying to flank us, sir" Brother Cheiron calmly stated over the Vox-caster. He let a missile fly that destroyed a Vyper jetbike mid fire. "Good, I've got a surprise for them yet" answered Learchus. As the jetbike squad strafed around the rocks, the Combat Squad of marines charged with a hail of bolt pistol fire and leapt at the bikes with combat knives and chainsword drawn. The fight was quick and dirty as the marines cut through the Eldar. 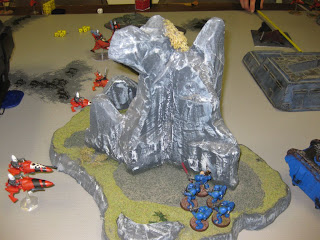 "Casualties from the other flank sir! Brother Tirus is slain" voxed Daceus. "Recover his gene-seed, and avenge his death, Sergeant Daceus" answered Learchus. A volley of Plasma gun fire could be overheard, as more jetbikes exploded from Ultramarine fire. Their streaking in and out from behind the rocky terrain could not save them today.

Up ahead, Learchus could see the jetbike patrol's leader voicing orders, then turn and fly towards his seemingly isolated squad. The bikes slammed into a blue wall of power armor, and after a melee of scorched armor and severed Eldar apendages, a dead Eldar patrol leader lay at Learchus' feet. Seeing their leader fall, the remaining patrol began their retreat. 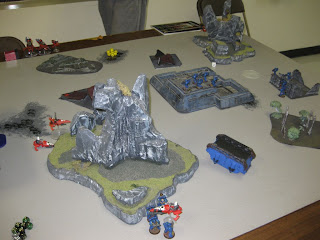 The Marines of squad Daceus called in, "They are retreating sir, bunker secure". "Good", voxed Learchus, "call in a recovery team, and get me another Razorback".