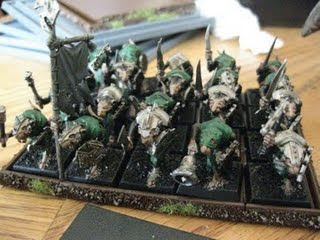 It's going to be a busy weekend. I'm going to the Hockey game tonight, and a full day of driving and eating tomorrow, then painting, gaming, painting, painting, and more painting. Tale of 4 Gamers armies are due for our first games on Tuesday, which means I have a full unit to paint, and finishing touches on another (pictured). I also have some Space Marine vehicles to paint for the Combat Patrol League, based on the list I just wrote up to try in the first week of games. Here is my weekend checklist:


Also, I had a marathon game of Warhammer last night. 2 new players playing with large armies lead to lots of rules questions! The Skaven were victorious, with the following observations:

-Hell Pit Abomination is very, very powerful. "Why don't you just take two of them every game"? Because no one would play against a 2 HPA list unless they were forced to in a tournament. He killed an Engine of the gods, Cold One unit, and finished off a Saurus block pretty much solo. I spent all of my anti magic getting him into charge range though. Everyone has an idea of how to kill this thing... lots of fire and missile attacks.

-Doom wheel is very fun in a random blow up your own army sort of way. On 6 shots from it before it died, 3 shots were into my own army, and 3 shots were misfires (although one misfire was a 6, adding d6 to my movement for the remainder). Like Brian said, the Doom Wheel is 190 points. 150 for the Doom Wheel and 40 for a unit of Slaves to drop next to it and soak up first turn or 2 shots.

-BSB is pretty vital for a Skaven army. It saved the game for me, imo. Sort of a General new WHFB player observation.

-My Furnace didn't get a single round of combat in. I'll have to wait until this weekend to see how it performs.

-Skaven Warlords kitted with a war-litter and other cc gear is still not a combat monster. I'm better off keeping the gear to a minimum and making him survivable. He died to a Saurus Hero in a challenge.
Posted by Rhellion at 9:55 AM