Working on a new draft 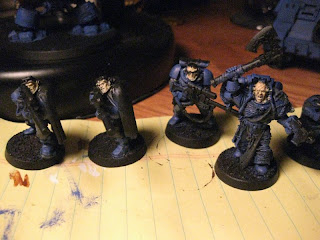 I picked up a set of sniper Scouts and a Librarian, and added them to the new army I have been play testing for the upcoming O.F. Chapter Tournament.

At this point, I have the entire army either fully painted (most of the infantry) or base coated (most of the tanks). The only things that are just primed still are the Landspeeders.

Here is the army. I've played it once, and tabled a Blood Angels army. This version is slightly changed from that game, to take a Whirlwind instead of a Vindicator.