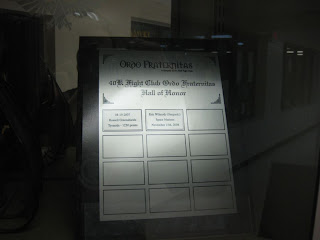 Today was the OF game club chapter tournament. A good turn out gave us 16 players. As people started to show up, the first 8 players or so were all Space Marines! We ended up with a few more Chaos scum and Xenos by the end of registration.

Huge thanks to Brian for running a great tournament. Everyone was in good spirits, and I couldn't think of a moment that was not friendly. Thanks to my opponents Nick (Necrons), Lee (Ultramarines), and Charles (Plague Marines). 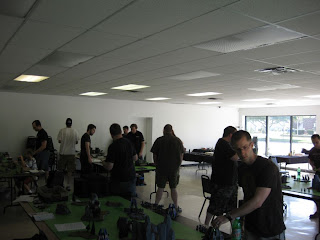 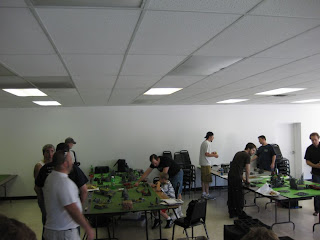 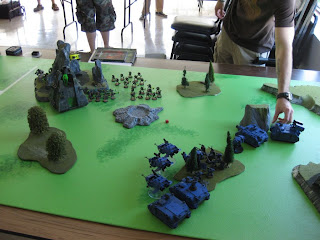 Game 1 was Necrons. I had JUST played my first game ever against Necrons this previous Tuesday, so I knew what to expect when my opponent dropped that Monolith on the table.

Our mission was Capture and Control, with Spearhead Deployment. 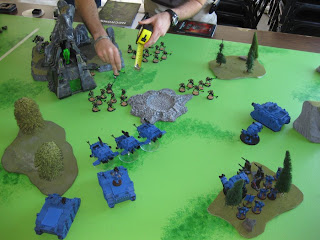 In the opening round I focused my Landspeeder multi meltas on the Monolith and shook it. I used my other ordinance to destroy Necron Warriors. 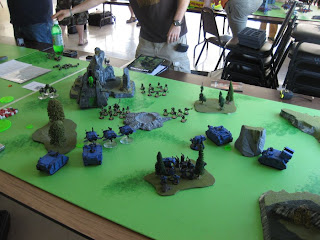 I wanted to focus on flanking with my Rhinos and breaking for his objective (behind the large rocks). My objective was heavily guarded with a Combat Squad and my Sniper Scouts. 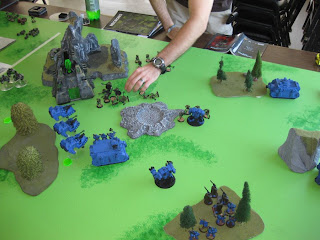 I kept the Monolith Shaken or Stunned the first 3 turns, and were killing enough Necrons that my opponent was teleporting them every turn to get his bonus We Will Be Back rolls to save his troops. 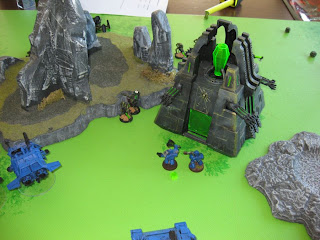 Finally on the 4th turn, I was able to charge the Monolith with my 2 Dreadnoughts and they destroyed it. With no way to assist his WWBB rolls, my heavy fire was able to take down enough Necrons as my flanking attackers baced by Landspeeders captured the second objective. 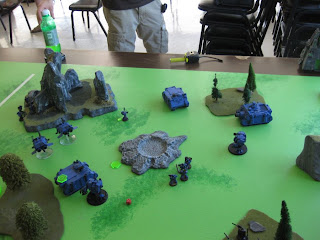 With time winding down, I was able to force the Necrons to phase out. 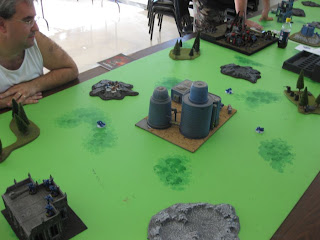 Game 2 vs Ultramarines! Bad blood between the 3rd and 4th companies...

Our mission was Seize Ground (5 obj.) and Dawn of War deployment. 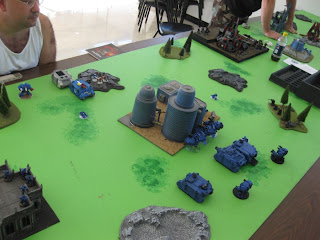 The fourth company surged forward and was able to destroy the enemy Dreadnought early and cripple the Scouts with my Whirlwind. 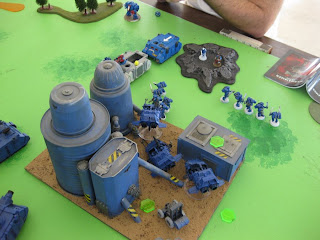 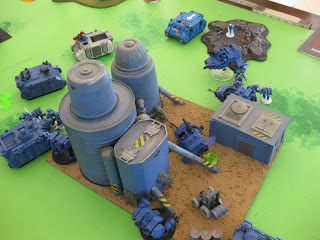 Landspeeder down, Dreadnought down, and assaults coming towards my Vindicator. 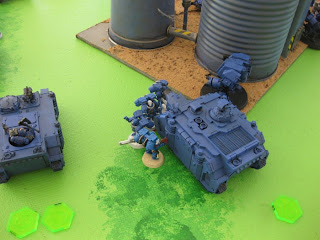 The Vindicator survived to fire another round after escaping 2 different assaults. 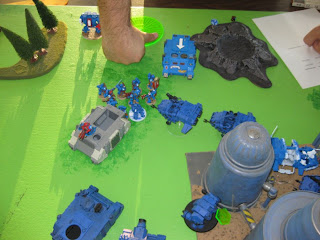 My speeders were down 1 and had 1 model without any weapons, but the remaining speeder was harassing enough.

Lee had the objecives in his favor at the end of turn 5, but we rolled and the game went on! 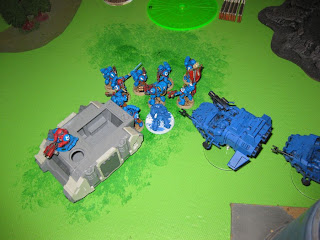 My combat squad's fortification was destroyed, so they were fighting in a battle on the ground with a scout squad from the Storm that contested an objective. In the center the Landspeeder remained to contest.

Lee sped across the battle field in turn 6 to contest my rear objective. 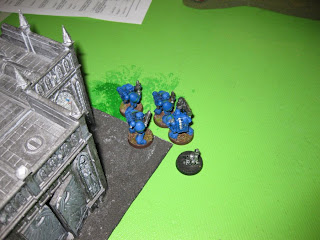 But the Combat Squad pulled it out in combat, and captured the lone controlled objective. All others were contested or not captured at all. 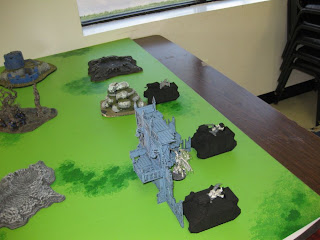 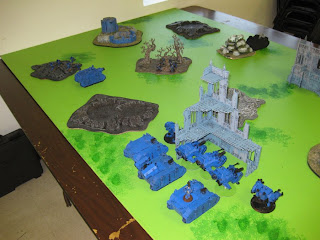 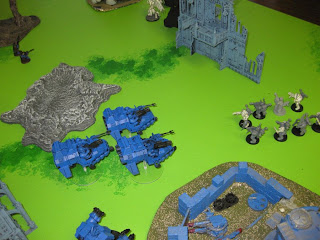 I was feeling very confident after my first 2 victories, and the Ultramarines surged forward to face the Chaos scum! I was able to pop the right side Rhino.

On the Chaos turn, things started to go bad when my Ironclad was blown up. The Demon Prince was lashing my Scouts and Marines into the open and shooting at them with his Havock missile Launchers and wiped them out with the DP in CC. 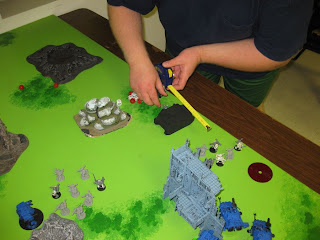 I was able to blow up all 3 Rhinos, but even with concentrated fire I couldn't pull off serious Plague Marine casualties. 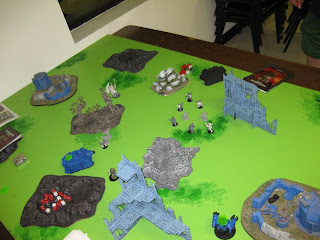 The Plague Marines moved around the battlefield and was able to use their melta guns (2 per squad) to tear into my armor. In addition, his Oblits came in late and devasated my rear artillery line.

Finlly my lone remaining Landspeeder was taken out by the oblits and my game was over.... TABLED!


All in all a good experience. I placed 3rd overall even after the harsh 3rd game beating, because of my high victory point totals from games 1 and 2. I thought I was in the lead for the tourney going into round 3 (two others were also 2-0, and I think I had them beat on points), and I got cocky! I think I should have stayed back more vs the Plague Marines and used the cover and hit and running with the speeders from max range before moving my army into meltagun range.

Super fun tournament, great learning experience, and I even won a gift certificate in the random draw at the end of the night. Big congrats to Jeff on his tournament victory.