Ogres in their first Tournament

I hit up Gamers Sanctuary in Flint, MI yesterday to take the Ogres for their first spin on the tournament tabletop. I pushed around a few lists in my head, but with so little experience with the Maw worshipers I decided to just go for the throat and help my chances. Just FYI the tournament scoring was very different that some events. A 20-0 win required you to beat your opponent by over 2400+ points! My list looked like this:

Very simple, yet powerful list meant to do one thing, just hammer the enemy lines.

Shadow L4 with the dagger, double hydra, spearmen bunker, corsairs, etc. Fairly standard DE tournament list. The scenario was Dawn Attack and luckily I was directly across the table from the bunker with my Gut-star and got the first turn. 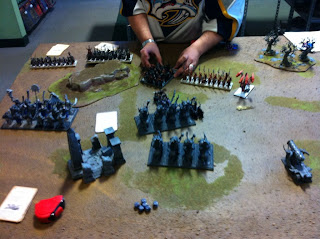 Turn 1 I was able to snipe 1 Hydra and get off regen to protect my advance across the table. I charged forward and crushed the Corsairs, but the escaped with their flee movement. The Dark Elf spearmen bunker charged into my flank but the Hellheart hit both wizards on the DE side, exploding within their unit and killing 20 or more Spearmen in their own magic phase while draining the pool of their entire magic resources. 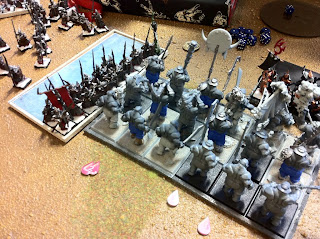 Charges on my next turn popped the Blackguard, and the spearmen panicked and were run down. The army falling apart around them, the Ogres cruised to a solid victory.

Dark Elves again, with more shadow magic but the Cauldron with only 1 Hydra in the list. The Dark Elves deployed mostly in the opposite corner and forced me to chase after them this game, which was a good tactic against the Gut-star. Early in turn 2 I was surprised when I charged into the Executioners whose Hag BSB gave them always strike first. They ate through my Dragonhide banner Ogres before they even had a chance to blink. 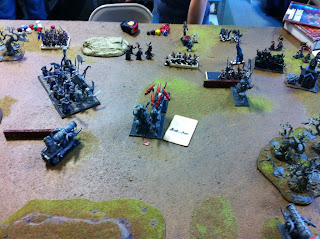 Early on I was already on the back foot as I had to bull rush the Gut-star forward and try to regain points. I picked off the hydra and magic'd the far left Spearmen off the board, while charging everything in range of the Guts. By the end of the game units were just fleeing from the giant unit but I would get lucky every time and catch them. Late in the game a Pit of Shades got off vs the Gutstar, but I then revealed the Rune Maw and avoided disaster handily. The last turn I charged the Cauldron and finished it in a challenge (for a bonus battle point) to sneak by Neil with an 11-9 game.

Game 3 vs Al's Warriors of Chaos 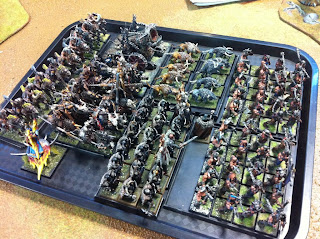 A quick and messy game vs the Warriors. As you would expect we were in combat early and often. My turn 1 the Ironblasters sniped the Hellcannon right away as the Ogres maneuvered forward. Al charged the Marauder horde into my left most Mournfang after I failed to charge the round previously, and they crushed them! I was surprised the Marauders did so much damage, leaving me with a fleeing Mournfang but escaping being wiped out.

On the opposite flank the Chaos Knights charge my other mournfang in front, while the fast Marauder Horsemen charged from the rear. To me, the second charge was the fatal mistake that lost him the game. I passed an amazing amount of saves with the Mournfang armor and the bubbled 4+ regen my Slaughtermaster got off previosuly before losing 3 magic levels due to the infernal puppet and Pandemonium. I derected ALL of my attacks to the rear unit and totally wiped out the Marauders, giving me enough combat resolution to defeat and then run down the Knights into prim position to flank the Chaos Warriors on my turn.

I then charged into the Warriors with the Fangs, and also the Gutstar, while both Ironblasters charged the Marauder horde. The Marauders actually lost, and then failed their steadfast test and got run down by the remaining Ironblaster! The Mournfang and Gutstar crushed the Warriors and ended the game quickly, on the top of turn 3 and score a 20-0 win with bonus battle points adding to that total, and giving me the overall win.

The tournament was over and the Ogres walked away with their first tournament win in their first appearance. I was still disappointed because I made A LOT of mistakes during my games. Constantly forgetting my Rock Eye, constantly forgetting my Maw attribute and getting the +1 to the next spells I cast, and even forgetting to charge with the Mournfang against the Warriors (which didn't really sway the game's outcome). I played sloppy at time but it didn't hurt me, luckily.

Next weekend I will be defending my GLWL Tournament Championship with the Skaven!
Posted by Rhellion at 8:56 AM