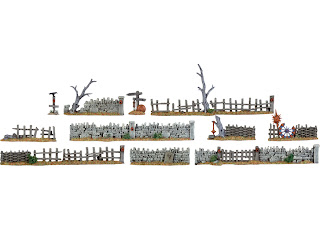 Does your local store have any screwy rules they try to impose? I played a game yesterday at the GW Hampton Village Hobby Center in Rochester, MI. I found an Empire opponent, decided on a pitched battle, and placed terrain. After we set up our models, he starts placing fences and walls in front of all of his models!

"What are you doing. Is that some sore of detachment rule I don't know about?"
"No. The store rule is that if you buy store terrain, you can always use it in addition to board terrain, and place it after deployment."

Uh.... WHAT? So GW stores now allow you to buy an in-game advantage with money, that is OUTSIDE the rules of the giant book I paid $75 for? That is an interesting (read as: asinine) way for them to boost their sales of terrain and encourage their players to actually strategize/powergame with these "fake" rules. I told him it was my first time ever hearing of this rule, and I was not comfortable being surprised with it. The manager ho-hummed and told him to remove his EIGHT fences that he had placed directly in front of his entire army. We played a real game of Warhammer, and the Skaven were victorious over the man-things.

So thank you GW Hampton Village. You made my decision for upcoming games that much easier, by not having to decide between playing at your store (with your idiotic house rules) or my other FLGS's.
Posted by Rhellion at 9:08 AM