I have been good about getting a lot of games in to really learn the new rules system before 'Ard Boyz. Tuesday I played Ramon (plan-9)'s Lizardmen in a close battle. We set up terrain and rolled a scenario this time, and got Dawn Attack. Interesting deployment rules, but otherwise a normal fight. The deployment was kind to my army. The Lizardman deployment was not as kind. He was forced to deploy both blocks of Saurus to the right flank with his Stegadon. His Slaan and Skink/Kroxigor block to the left flank. His Salamanders were the only unit in the center. I ended up with most of my units in the center, with my Grey Seer in some Clan Rats on the left flank, and my Abomination and some Slaves on the right flank. *Note: I did proxy my Doomwheel as a Plagueclaw Catapult. I wanted to test it out before buying an Orc and Goblin Rock Lobba to convert. We both Scouted our units. The Chameleon Skinks tried to make a play for my Grey Seer, but I counter deployed my Gutter Runners to be prepared to deal with them. My second unit of Gutter Runners used their Sneaky Infiltrator rule. 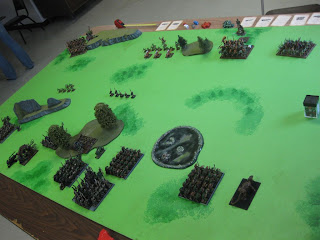 I rolled a 6 to steal the initiative, and we were off to the races. The Abomination shambled forward, heading for the Cold Ones and Skink block. I immediately turned and marched the Gutter Runners towards the Chameleon Skinks, ready to unload poisoned slings. They didn't make it that far though, because my Warlock Engineer cast both Warp Lightning and Scorch to eliminate the threat. The 13th Spell was cast naturally, and dispel scrolled. The Lizardman turn was spent moving forward. I dispelled Throne of Vines, and then scrolled The Dwellers Below. The Lizards didn't get much from their Salamanders because of poor rolling. I was definitely fearing these things more than anything but the Slaan in the Lizard army. 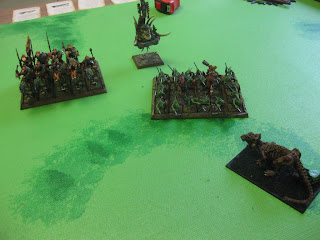 We started to get stuck in right away turn 2. My Gutter Runner sneaky infiltrators arrived on the back edge of the board, ready to attack the Skink Priest. My Abomination charged into the Skinks, and I charged my Slaves into the Cold Ones to keep them occupied. I failed charges on both my Plague Monk and Giant Rat units. Curse you random charge distance. I got Plague off, and killed some Saurus in one unit, and skipped to the second unit killing some more. The 13th Spell went off naturally again, and was scrolled again with the Cube of Darkness. The Gutter Runners did their job and killed the Skink Priest, after unloading their 10 poisoned sling shots into him. In close combat, the Slaves were cut down mercilessly as expected, but held Steadfast as expected. The HPA cut down many Skinks, but not as many as I would have liked. I took 4 wounds in return from the Kroxigor great weapons. It was starting to look like a mistake charging into the unit, but with the deployment I had little choice. 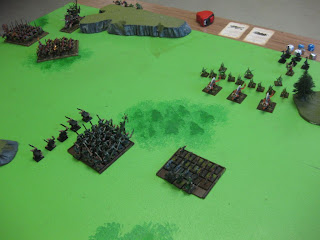 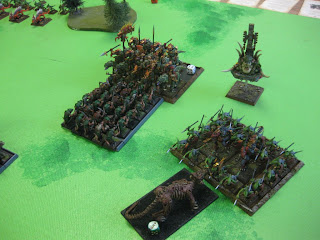 The Cold Ones cut down the remaining Slaves, just in time for me to set up a charge next turn with my Storm Vermin. The Slaan magic phase was fairly uneventful again, and the Salamanders failed to kill more than 4 Plague Monks. Poor rolling for the Lizards. 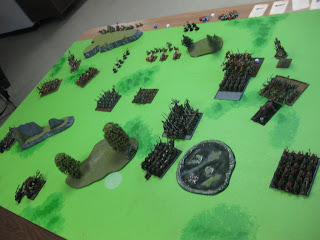 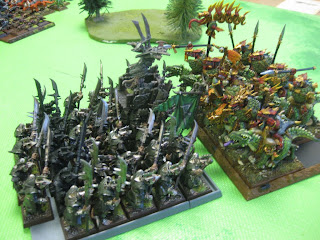 The next turn, the Saurus make a miraculous charge into my Clan Rats with the Grey Seer by rolling box cars! He barely survives with one wound remaining. The next turn he gets some more buffs cast onto his unit before being killed. The rest of the combats are mostly ground out, with the Clan Rats including the BSB getting a flank charge on the Skinks and Kroxigor to finally break them. The Salamaders eventually break from the Clan Rats because of the heavy casualties they took from magic before charging in. The Slaan narrowly escaped a charge late in the game and we end on turn 6 after much bloodshed. 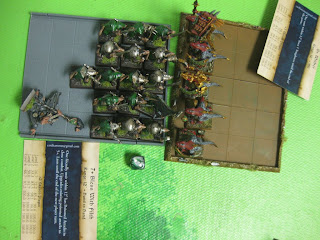 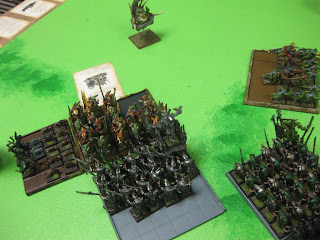 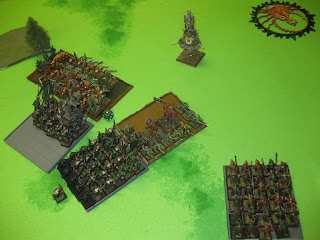 After turn 6 we tallied up our points. Neither of us were able to take out the enemy Generals, and I had only captured one standard, so we looked to Victory Points. The Skaven pulled out the victory by about 450 victory points. A minor victory, and a closely fought game! Magic was hardly a factor until the late turns when the Slaan was able to use Life after the Grey Seer was dead to buff up and Regrow his Cold Ones. It wasn't enough though. Glory to the Horned Rat!
Posted by Rhellion at 7:50 AM