2500 Skaven vs Warriors of Chaos

On Tuesday, Ramon and I gave it a go with my Skaven army and his Nurgle tainted Warriors of Chaos. I ran some updates as the game went on through my Twitter page. Here is the official battle report! 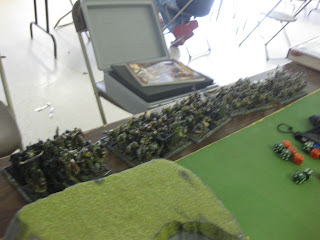 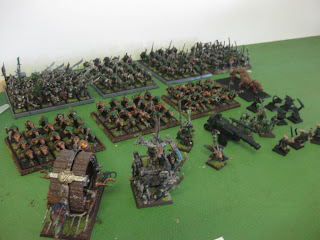 
Starting off, Ramon deployed most of his army in the center. His Knights were ready to charge right up the middle. I loaded my center with Slaves, but my Doomwheel and Abomination on the opposite flanks to counter his chariots, and then scouted both squads of Gutter Runners on the same flank as the Abom, just 12" away from the Chaos Chariot. 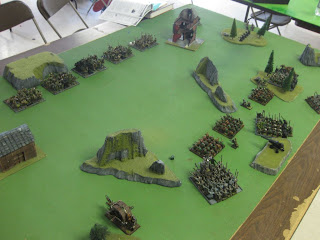 I rolled and won the first turn. My Abom and Doomwheel charge forward their random movement, and the Gutter Runners swarm the chariot, ready to fire. Most of the rest of the army just hangs back. First turn magic phase I cast the Dreaded 13th Spell on a natural roll of 28 on 6 dice. No Irresistable Force, but Ramon hasn't taken a Dispel Scroll! He doesn't get double 6's to dispel, so I turn most of a unit of Chaos Warriors  into Clan Rats, and they are removed as casualties. Both of my mortars misfire, and one blows up! My Gutter Runner squads put 2 wounds on the Chaos Chariot. On the Chaos turn 1, I failed to dispel Magnificent Buboes on two dice by rolling a double 1 and ending my dispel phase with the Grey Seer. He took a wound that I forgot I should have taken a ward save for. 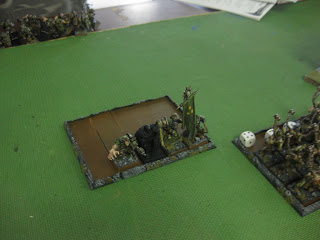 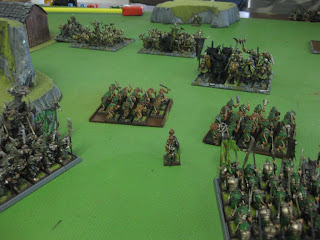 On Turn 2, my Hell Pit Abomination charges the unit of Marauders with flails, and my Doomwheel makes it to the opposite Chaos Chariot. My magic fails, as I fail casting Plague on 4d6 as my first spell. This turn I do kill 2 Knights with my Poison Wind Mortar. When I fire the Doomrocket from my Warlock Engineer, I over roll my perfect distance by 2 inches, but this manage to kill 15 Maraders! The they flee and eventually run off the board. The Doomwheel shoots the chariot for 3 wounds, then finishes him off in close combat. I thought for a second I may be in trouble with my HPA charging into Marauders with flails. But poor rolling on Ramon's part, and good rolling on mine saves the HPA of all but one wound. Impact Hits, random attack, then the Thunderstomp are too much. The Marauders flee and are run down by the Abomination. The Gutter Runners finish off the far side chariot, but are then out of most of the rest of the game. Chaos turn 2, the Knights charge my Slaves that I have positioned as road blocks. My second unit of Slaves flees from the Chaos Warrior charge. They redirect to my Storm Vermin and I accept, but the Warriors come up an inch short on their charge roll! In combat, the Knights slay 9 Slaves, but leave enough so that they remain steadfast, since I killed 2 Knights in my shooting phase. They make their Steadfast roll, which is at Leadership 8 with a BSB re-roll, and then do a Combat Reform after losing to face the Knights. 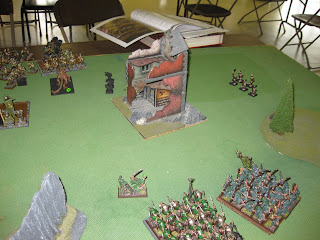 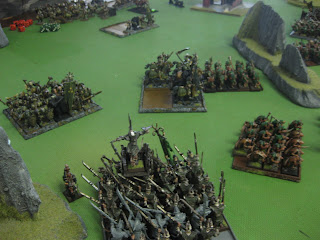 In turn 3, the Warlord and his Storm Vermin charge into the Knights flank. The Grey Seer, sensing imminent combat if the combat doesn't go well, leaves his unit to perch himself on the hill next to the Warp Lightning Cannon. He then casts Plague into the swirling melee in the center of the field. The Grey Seers kills 5 of the remaining 7 Chaos Knights, but at great cost. He also kills 10 Slaves and 17 Storm Vermin (including their champion)! The Chaos Lord challenges, and like a fool my Warlord accepts. I figure I can wound him and he will have no armor save. For the first round I am at least correct. The Warlord inflicts 2 wounds on the Chaos Lord, and receives one in return. The Chaos Knights only lose by 1, and hold fast. On the other side of the battle, Clan Rats 30-strong charged the remaining 13th Spell plagued Chaos Warriors that were on that side of the fight. They finish them off and run them down. On the Chaos turn, remaining Chaos Warriors charge the Storm Vermin flank. The Chaos Lord kills my Warlord, and the whole combat is lost from there. The Knights hold, and the Warriors run down my Storm Vermin but fail to charge into the next unit. 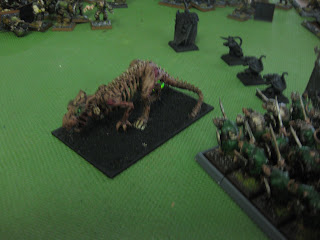 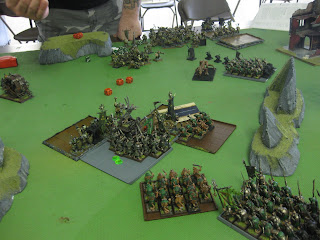 With only a few units left, things are looking grim for Chaos in turn 4. The Hell Pit Abomination charges into the Chaos Lord and the Knight standard bearer who remain, and the Doomwheel charges into the lone Chaos Sorcerer who had previously left his unit of Warriors (surviving their destruction). The 13th Spell cast by the Grey Seer who is overlooking the battlefield from the cannon perch destroys the last Chaos Warrior unit on the field, leaving 7 Clan Rats in their place. The Doomwheel blasts the Sorcerer Lord and then runs him down in combat, running into the Chaos Knights. The combined attack from the Abomination and the joining Doomwheel are plenty, and the Chaos Lord is slain as the last model left on the field. On my side of the field, I lost my Warlord, my Storm Vermin, and a unit of 20 Slaves. I captured two standard and killed the enemy General. Skaven win 3150 to 655 (correction from the Twitter feed). 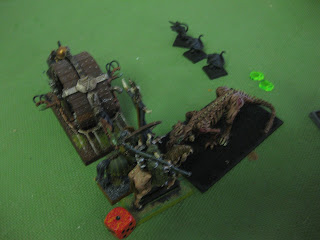 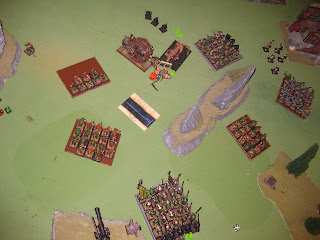 Some reflections on my army list and the game. First, Ramon now knows how important it is to take a Dispel Scroll at point levels high enough to include level 4 mages. He also mention he was interested in including his own level 4. It's a great idea, especially for the +4 to dispel. Death magic would probably also fit into his Nurgle theme if he had an undivided level 2 caster, and would be of use for some character sniping.

I think the Warlock loadout I included was the perfect setup. He channels one spell die on a 6+ and another on a 5+. The Doomrocket was worth its weight in gold. For only 150 points he is an excellent buy. While I still had over 34% of my army as core, well over the minimum, I was able to use my troops to setup my heavy hitters. Anvil and Hammer if you will. The Hell Pit Abomination is truly a beast, and while I don't normally use my Doomwheel as a close combat support unit, it did well in that roll during the game. I normally use it as a mobile tank that hunts multi wound monsters or heavy cavalry.

Overall a good game, and some good practice with the Skaven.
Posted by Rhellion at 8:16 AM