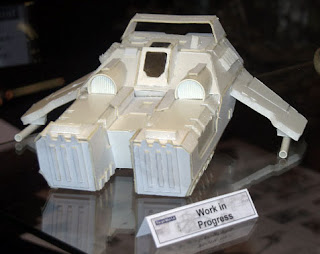 Will the Tantalus Lander look anything like this Forgeworld work in progress Storm-Eagle?


Apparently the Tantalus Lander is coming in the new Blood Angels codex. There is some speculation on the 'net about whether it will be available to all Space Marine Chapters through the upcoming Battle Missions book. Here is some info, and you can decide for yourself. I'm holding my breath for it, so if do don't post anything for a while......... just wait longer.

In the new Blood Angels Codex, due to be released toward the end of April, there will be a brand-spanking new vehicle introduced for their army. The GW designers have finally listened to old Valerian and introduced the Tantalus Lander as an air and space capable flying support vehicle to fill the niche between the Land Speeder and the Thunderhawk Gunship. Here are the stats:

So, for the concept just imagine a Space Marine version of the IG Valkerie. The model is reminiscent of the Thunderhawk, but smaller, with an Assault Ramp on the front like a Land Raider. The backstory on this "new" vehicle is that it has always been around in the Space Marine chapters, but an Administratum clerk once mistyped it as a Thunderhawk, and thus the Imperium fell victim to false reports. Many of the classic ground planetary assaults were actually carried out in Tantalus Landers, and not necessarily Thunderhawks.

Alright, so as I said, this is a new vehicle that will be introduced in the Blood Angels codex, but additional rumors indicate that the vehicle will become available to other Marine armies, and that will probably be accomplished in the upcoming Battle Missions book, that is due to be released in March.


I don't think there is any way they lose out on the revenue by not making it available to all marines. Plus the backround states all chapters use them. More...

The Tantalus only allows for jump pack squads to assault after moving or deepstriking. Everything else disembarks as normal. It's not possible to assault with a Dreadnought or Mephiston out of a moving Tantalus.

I read it in one of the many rumor posts over on the Blood Angel's forum. Will try to go back and find the post. There were two indicators that it might/would become available to all Marines. First, was the rumor to that effect, and that the Battle Missions book was supposed to include various new units in addition to just the rules for more mission scenarios. Second, the fluff behind the Lander was that it was commonly used by all Chapters (not just Blood Angels), and had often been mistaken for Thunderhawks in reports of Space Marine planetary assaults.


Source: The Bolter and Chainsword