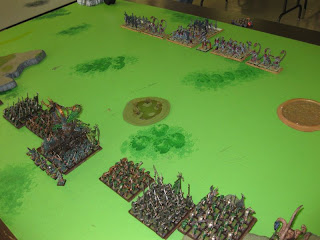 Dave won the first turn and sent his Keeper of Secrets and 2 units of Fiends of Slaanesh marching their maximum movement towards my lines. Dave was playing aggressive for sure. Then, when casting Phantasmagoria, he miscast and I was able to cast the Dreaded 13th Spell, consuming an entire unit of Daemonettes along with a Herald.

At the center of my line, facing down a Greater Daemon, my plague monks and furnace charged and the wrecking ball won me the combat. The 2 devastating losses on the first turn set the pace for the rest of the game.

While Dave was able to take out my entire Plague Monk unit and other large units, my big ticket items were still on the board, and I was able to win 3 table quarters and capture 4 standards to secure my win. The game was still much closer than the score actually showed. 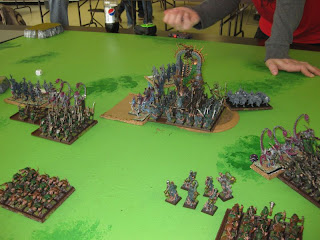 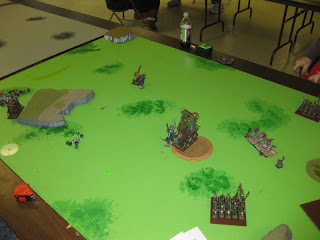