Another model I have been working on for my Vampires is the Lord model. I am using Archaon as my Vampire Lord, and he is awesomely huge. I also wanted him on top of a taller base to put him even higher 'above' the unit (to look cool, yes, but mostly so he would fit on a cav base). I still have to grab a Terrorgheist and steal one of the rider heads for this guy, but he is almost finished. 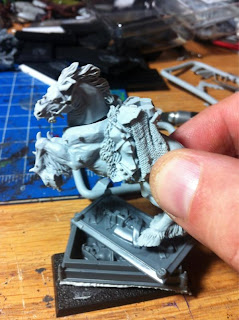 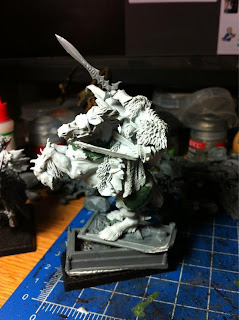 I switched out the thick Chaos sword, and wanted a thinner sword for a more 'finesse' look. A lot of the other Vamps I have looked at have thinner swords.

I also added Isabella Von Carstein to the mix, but chopped her off at the waist and mounted her to be a Hero in the army. She looked good on a less masculine horse, so I put her on a Dragon Prince mount. Here she is and with another shot with the beginnings of the front rank ranked up. 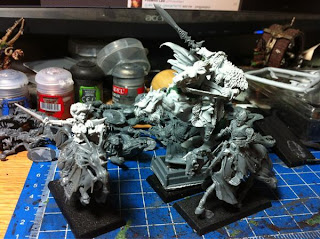 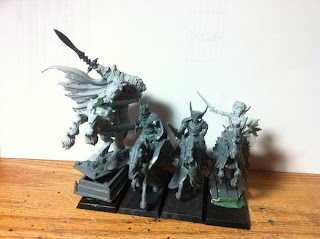 More in the works very soon. I was at the hobby store yesterday and picked up loads of basing supplies. I need to grab some Simple Green and primer tomorrow at the hardware store and I will be set to get serious with this plastic.