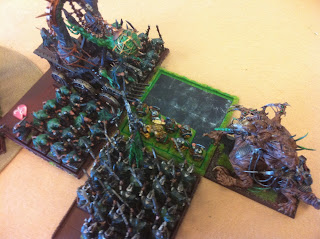 I drove down to Holland, Ohio this past weekend to face off against the Ohiohammer podcast crew in a small 1600 point tournament at Hobby Town USA. Things went well for the Skaven, and I am slowly getting back into the swing of things as I start to prepare for more local tournaments, Waaagh Paca, the GLWL kickoff, and the main event: Adepticon 2012! Here was my army at 1600:

I was running everything with bare bones upgrades to fit it all in, and it worked out in the end after I got over game 1!

Game 1 vs Tomb Kings, I was facing off against 2 Warsphynx's, a NecroSphynx, and a Hierotitan all at 1600 points. I figured it would be an easy task if I rolled up Crack's Call... then didn't roll Crack's Call! From that point I was playing "not to lose" and was able to take out all of his core units (the stuff I was able to kill). I think I made one mistake not going after the flank of a Warsphynx and trying to kill it with combat res with my Furnace, but ity led to combat with the chariot unit and more guaranteed points. His L3 Caster General abandoned his unit and was running around solo at the end of the game, and I failed on 3 chances to shoot/magic him down. Unable to kill all the giant monsters at 1600 points I fall 6-4 in a very tight loss.

Game 2 vs Dwarfs I was able to get off a quick win. Across the table I was facing an Anvil Runelord, Warriors w greatweapon, Longbeards with shields, a large unit of Rangers w great weapons, and 2 cannons and a grudge thrower. First rule of facing Skaven? Never let the Grey Seer use Skitterleap. I then set up Crack's Call with my Warpstone Tokens and took out all of the warmachines except for the surviving final Cannon (that didn't have the flamin Rune). A combo charge of Slaves and the Abom next turn take out the Rangers completely, and I was able to mop up from there to win big 15-0.

Game 3 vs Lizardmen, playing the remaining undefeated player. An ethereal Slaan in a horde of Saurus, some Saurus cav, loads of Skink units, and 2 single Salamanders. I was able to focus on the Saurus unit with shooting and magic over the first 2 turns and get it down to about 20 models from 30-something. On top of three I charged into a skink unit close by with my plague furnace horde, popped them and had set up to overrun into the Saurus so the next turn in combat when I counted as charging. Next turn rolls around and I defeat the horde, they fail their re-rollable insane courage, and I pop the Slaan and run down the horde for a huge 15-1 victory and win the tournament by 2 points.


It was a fun time driving down to see the Ohiohammer boys. After the tournament I recorded a Skaven army book review with them. Be sure to listen to Ohiohammer episode 10 to check it out!

Next weekend I have another tournament up in Flint, MI! Three in a row! Look for a battle report next week sometime.
Posted by Rhellion at 8:30 AM