The Gamers Sanctuary in Flint, MI has started running regular Fantasy tournaments every month. I attended their first with the Skaven to see how I could do against a new field of opponents. Here is what I took and how well I did: 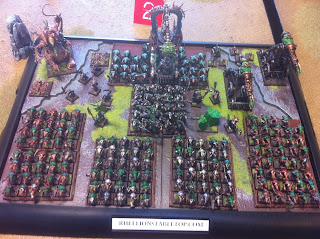 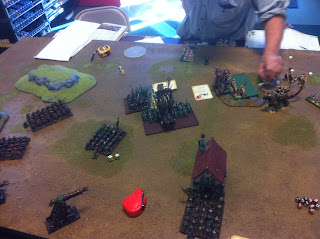 The scenario was Dawn Attack, and I had the first turn. To start off, my Gutter Runners were deployed up the middle, and for the first time I utilized Bless With Filth on them. As they were already poisoned, the unloaded a volley of 5+ poison sling shots at the Hierotitan, but cam one wound short of killing him. My cannons unloaded on the chariot block, killing one.

Turn 2 I went on the offensive with my second Grey Seer, Skitterleaping him towards the chariots and titan. After arriving though, he miscast and lost a level, along with Skitterleap. My Storm Vermin slammed into the flank of the Skeletal Horsemen and wiped them out, eliminating the TK vanguard.

Turn 3 the Storm Vermin were able to get into the flank of the King as the Plague Furnace charged the front of the chariot block. In combat the Hell Pit Abomination died to a flurry of Tomb Guard, but not until after killing all by 6 of the unit over two turns. The Skitterleaping Grey Seer while short on mobility, was able to Crack's Call the Hierotitan, a Prince on foot, and a row of Tomb Guard. After the Furnace finished off the chaiots, BSB, and General, my opponent conceded on turn 3.

Game 2 against David's Vampires who I have played preparing for the GLWL Team Challenge, and who I plan on seeing in this year's GLWL League. Here was his list, with TWO Terror Gheists. 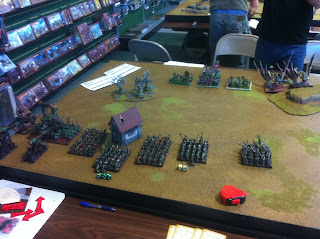 Turn 2 was filled with magic influencing the battle. David cast Van Hels with his Vampire Lord irresistibly, slamming his remaining Grave Guard into my second Grey Seer's Clan Rat unit, but losing both Van Hels and Invocation when he was drained of 2 magic levels. The Grey Seer survived so that on the next turn he could unleash his own magical flurry, but he also miscast and Dimensional Cascaded! With a lucky roll I survived, and blasted the Grave Guard with the large strength 10 template, finishing the unit off with an unintended explosion. 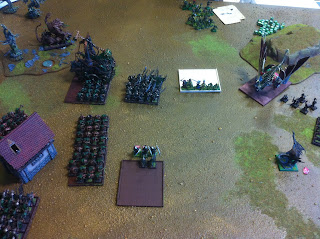 The same turn, I was able to charge the Vampire Lord who had been left in a small remaining Skeleton unit that had been decimated by the Doomrocket. Able to kill off the last 2 skeletons and defeat the Vampire Lord through crumbling combat resolution, David's army started to crumble around him. On turn 3 I was able to shoot down the Vargulf and 2 more Cairn Wraiths and force a concession from the Vampires. 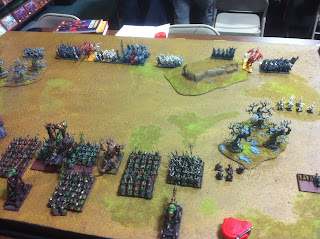 Game 3 vs Adam's Dark Elves was an interesting match. Adam was a new player but handily earned a spot at the final table being the only other 2-0 player at the event. He had a tough Dark Elf list that I had seen the likes of before, but is never an "easy" game.

I started things of strong on the first turn with a torrent of magic. For starters, I only rolled 3 dice for the winds of magic, but I used the Forbidden Rod to score a full 6 more power dice, and also channeled a die for a full 10 power dice while Adam only had 2. Plague first decimated multiple units of elves, bouncing between units and leaving the Blackguard and the General in a vulnerable unit size. Which then left the opening for my second Grey Seer to use his Power Scroll to cast the 13th Spell on only a 13 to wipe out the Blackguard and the DE General.

Turn 2 was more of the same for me with magic, able to take down the Cold One Knights to 1 model. Turn 2 the tables started to turn as the Dark Elves hit the Skaven lines. A mindrazored, poisoned up Witch Elf unit tore through the Plague Monks and Plague Furnace, killing them all in 2 turns. The Abom and the Storm Vermin got into the Corsairs and a Hydra then next turn, but were routed and the Abom killed while the SV were run down as they fled. Things swung back in my favor as the Abomination stood back up after death with 4 wounds, but more importantly did not give up its points. 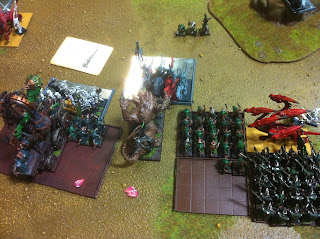 Finally I was able to come back strong on the final two turns with more magical onslaught. The Hydras had been tearing through my lines, but on turn 5 and 6 I took out 1 Hydra then another with Crack's call to finish the Dark Elves off. The game ended a solid victory 2100 to 1500 as I secured the tournament championship.

The Skaven win another, and I got some solid games in to prepare for this season's Great Lakes Warhammer League. Until next time!
Posted by Rhellion at 9:14 PM