Adepticon is quickly approaching, my army is painted, and my Battlefoam will be here this week! I will be all set when I get my XBoard display board painted up. I have one last practice game against Dark Elves scheduled for this weekend against the player who won my Cold War tournament. I promised pics and a battle report of the weekend's Adepticon Primer, so here it is. 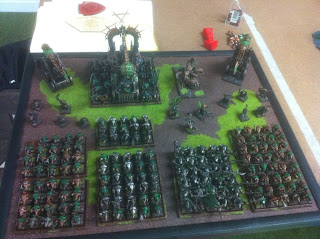 My opponent set up first, and rolled poorly for reserve troops, and left his Hammerers, Anvil of Doom, and Organ Gun off the table. He also had a large unit of Longbeard Rangers, so his only deployment was in a small area of the board. I was able to aggressively deploy and get to him quickly. 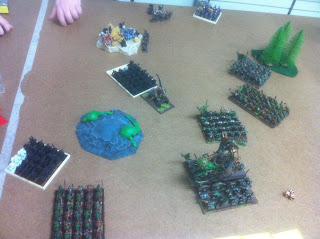 I stole the initiative and moved up quickly. On the second turn I  had the Gutter Runners charge the closest catapult, and the Organ Gun after it moved on the board. My Slaves came on from my board to block the Longbeards, but it was unnecessary as shooting and magic decimated them down to two troops. Once the Hellpit got into the lines, and the Gutter Runners took out all of the war machines, all that was left standing was the Anvil of Doom. The Hellpit was MVP after wiping out thew Warriors and overrunning into the Hammerers with my Storm Vermin, also wiping them out.

My deployment was horrible as my entire army was split into the left and right flanks. My opponent had almost all of his in the center with his Herd Stone and level 4 Death Shaman, and three level 1 Shadow Shaman with the signature spell to debuff me. I maneuvered my Grey Seer and Clan Rats around the right with the Plague furnace, as my Hellpit and Slaves moved from the left towards the main beastmen line. 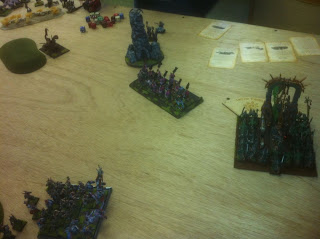 After taking out the enemy BSB with a single round of WLC firing, I focused on redirecting minotaurs. It was unsuccessful as they did eventually hit my lines, but the Hellpit and Furnace had been doing good work behind them. Late in the game my opponent fled his Bestigors from a Slave charge that he was sure would also bring the Hellpit into combat. His flee move brought him within range and sight of my Grey Seer, who finished the unit with the 13th spell. His General and BSB now gone, it was left to the cleanup... though my Grey Seer died in the end to minotaurs. MVP goes to the Power Scroll, and 13th Spell.

Game 3 was against my driving buddy for a few tournaments now, and the winner of Best General at the Fall Classic, Mike H. Mike had a Shadow Slaan, Engine of the Gods, Temple Guard, 2 blocks of Saurus, double Salamanders, and double chameleon skinks. After he set his first unit I decided to castle on the opposite corner and make him come to me. Hopefully I could focus on one Saurus unit at a time this way and get some good shots on his Steg. 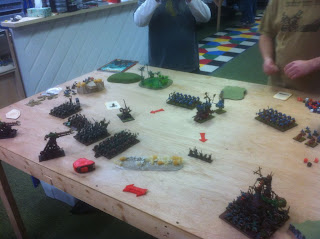 And that I did, when the first turn my WLC put two wounds on his steg and shot the Priest and engine off. Also first turn I rolled TWO separate 4's on the miscast table. One was a cupped hands miscast, graciously given to me by my opponent. The second was a 3 dice cast of Warp Lightning. My Grey Seer survived his 50% chance of vaporization on both rolls. Then my army went on a tear. The Warp Lightning Cannons finished off the Stegadon and took out Mike's Temple Guard, with the help of a natural 29 on the 13th Spell (no IF). The next turns had more Warp Lightning and the 13th spell (this time with power scroll) dropping the SLaan's new bunker to 5 Saurus. I finally shot the doom rocket into it, finished the last 5, and my opponent's army broke at 3 fortitude. MVP was the Warp Lightning Cannons.


Solid performance. I had at least one great game in each of the three phases to really give me some confidence going into Adepticon. I am not 100% sure on the survivability of my Grey Seer, but that is the risk I have to take at 2200 points with only a Grey Seer as General guaranteed to explode at least once per game.
Posted by Rhellion at 8:50 AM