I was able to get in two games this weekend for the GLWL, completing my first and second periods. Game 1 was against Darrell's Warriors of Chaos, and Game 2 against Jason's Skaven horde. 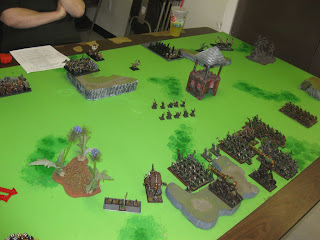 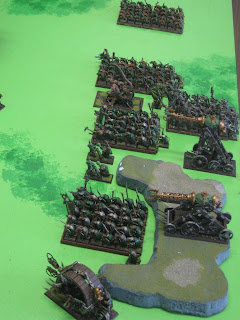 The Warriors of Chaos controlled the Watchtower but chose not to deploy inside of it, leaving it open for a massive Skaven Slave unit to occupy it on the second turn movement. There they stayed while Marauders of Nurgle smashed into the tower turn after turn, unable to move the steadfast, yet expandable Slaves. 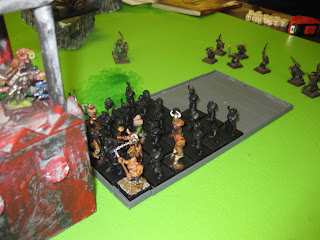 All around them Skaven firepower and magic crackled. Warp Lightning Cannons vaporized Chaos Chosen of Khorne, and Chaos Warriors of Tzeentch were twisted and warped into Skaven Clan Rats all around their vile General. The Hell Pit Abomination smashed through the Warshrine of Tzeentch as on the last turn a squad of Gutter Runners and unit of Clan Rats charge into the Marauders just in time to hold them away from the tower, and for the game to end. 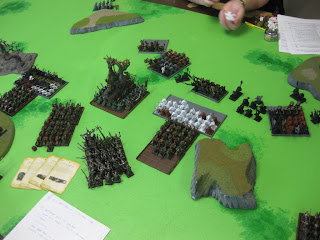 Two rival Warlords meeting on a pitched field, with no Grey Seers to be found. My Clan was superior through firepower, as on the first turn my Warp Lightning Cannons torched nearly the entire right flank squad of Rat Ogres with a single shot. My Abomination's hunger was too much for its own good, as it's charge destroyed many enemy Plague Monks, but the counter charge felled it. My Plague furnace charge into enemy lines and the Priest unleashed a devastating cast of Cloud of Corruption. The Furnace smashed through the second squad of Rat Ogres and into the enemy lines, as my Cannons continued to rain warp lightning on the enemy rats. A late surge by the Giant Rat horde caused my lines trouble, but there was too much damage done, as the enemy Skaven General alone tried to destroy the last cannon remaining near him for vengeance... as he fled from the masses of my Plague Monks. 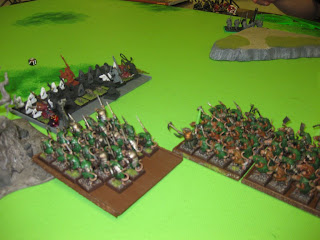