Another Gamers Sanctuary tournament attended, and another victory. This time I faced off against 3 new opponents (to me) with some of the tougher armies you would expect to face at an event. I brought a similar list to last month, though I removed one clan rat unit and buffed the other to 40 rats, and added more bodies to the Plague Monk unit as I felt it didn't have enough. 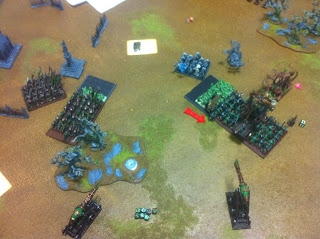 Game 1 vs Vampire Counts was against a fairly standard list for VC, but no Terrorgheists this time. Ghouls charging forward with my units having to deal with them were compounded by the table terrain. Half the board was very hard to manuever around because of graveyard terrain full of fences and impassable crypts. It almost forced us to play on a 4x4 section. I magic'd it up first turn and got lucky enough to continually bounce Plague around and roll high for casualties. The first two turns of magical onslought allowed me to finish them off handily when they eventually reached my lines. 19-1 win. 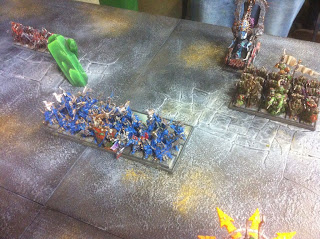 Game 2 vs a Warriors army that can be very difficult to deal with if you don't have the correct tools, but I did. 30 Tzeentch Chosen can give any army a bad day. Fortunately for me this was the game where my 13th Spell dice got HOT, casting it 4 times during the game and not losing any Seer's to miscasts. First turn Plague then 13th wiped out the Nurgle unit, and then I was able to focus on shooting and magicking the giant Chosen block while redirecting with Slaves.Game was a big 20-0 win after I tabled him thanks to a great first turn.

Game 3 was another 13th Spell to start the game. I can take no credit for the victory tactically, but that's alright with me. 13th Spell on the Temple Guard (in range of unit but out of range of the Slaan) to eliminate it. I was able to tie up the horde of Saurus on my flank and eventually lose my Furnace unit to it. I finished them off last turn, but not until after my Hell Pit Abomination got a hold of the lone Slaan who was unable to flee from him. I won solidly 18-2 to wrap up the tournament victory. I also won the award for most objective points, scoring 17 / 20 over the course of the event.

I will be back next month to Gamers Sanctuary with the Wood Elves if they are still in my possession! I didn't take them this month because I am short 2 Treemen for my possible list. Next month after Christmas I should have what I need. Though if you are interested in a Wood Elf army unpainted, EMAIL ME! I am looking to get back into 40K and don't have the funds to start again from scratch.

Also, here is you Skyrim interlude. My bad ass Daedric Bow that I crafted last night with 100 Smithing and Enchanting, and high Alchemy to make crafting bonus potions. Hehe, yes I even power game in 1 player RPG's on XBox. 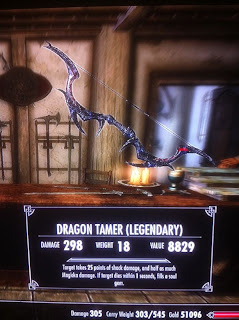