I got a game in for the first time with a "full" Warmachine army after playing the Beastmen this weekend. I have been wanting to play at this point level for a while and had only ever even played one game at 35 before, so the size was a little daunting as a new Warmachine / Hordes player. I was able to get another game in against Adam, who seems to be my most regular Warmachine player with my epic Madrak list. I should play with some other casters, but I really have been focusing on eMadrak as I learn the game. We played a scenario where you had to control the two zones once each to score 2 points and win. 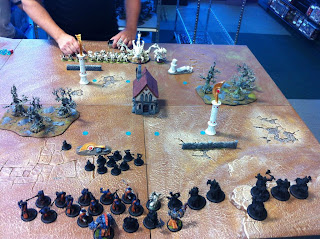 The idea of the list is tough cavalry and reach to go along with Madrak's "thresher" feat. Not too hard to grasp. I basically charged right up front and try to smash face (The "Axe to Face" Troll Strategy!). And it worked for me too, even though I got shot up as I advanced and lost my Fennblades, Adam focused hard on my left and I got in his grill on the right. 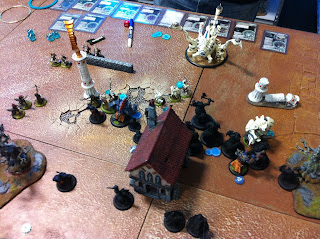 I was able to get +2 attack on the Pyg's and Blood Frenzy on the Long Riders and get into range to start chopping. Things ended when a Long Rider charged through two infantry with impact hits to get to Adam's caster and roll 6/6/4 for damage (with -4 dmg from armor), and then my Axer putting +2 move and Pathfinder on himself to get in range, make the final attack, and also roll box cars for damage to kill the caster for the Assassination.


It was a lot of fun playing at that level, and really makes me want to finish painting up my Trollbloods and start playing in more events. I'm pretty busy with the Skaven, but I see a lot of more Warmachine on the horizon for this Fall/Winter.
Posted by Rhellion at 9:19 AM