After setting up the Skaven battle line in the corner, there was apparently one unit of Clan Rats in reserve pushing a Warp Lightning Cannon to make it into the battle. The Vampire Counts deployed on the front line, ready to charge forward. Their Vampire Lord General on her Nightmare in the back of their line, avoiding the fight. 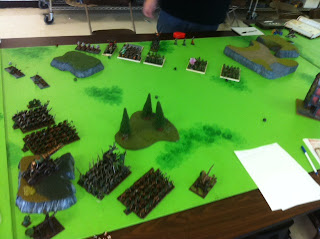 Early on all of the Skaven shooting failed to do any serious damage. Cannons were misfiring on the bounce and mortars and catapult were scattering off target. Jockeying for position, we then got stuck in on turn 2 when the Grave Guard charged into Slaves and cast flaming attacks on themselves anticipating a Hell Pit Abomination charge in the flank. 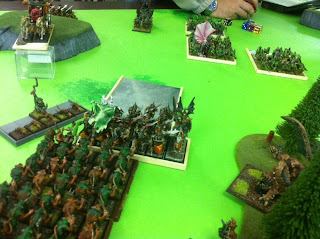 The Abomination didn't take the bait and altered its course right into a unit of Ghouls with the Vampire Fire Mage. It was a combination charge with a lone Warlock Engineer who charged to make room for a Storm Vermin charge onto the Grave Guard (which ultimately failed). The Hell Pit Abomination killed 17 Ghouls, and the rest, along with the Vampire, crumbled! 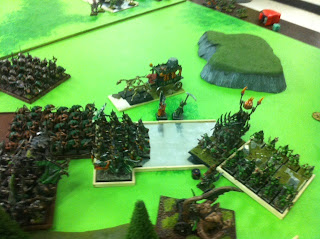 While this was happening the Grave Guard were smashing through the Slaves and Storm Vermin (and my Warlord) with the help of the powered up Black Coach. The Abomination eventually falls to a last die ASF bound roll and some Wraiths, and does not return to life. On turn 5, the flying Vampire Lord surged forward to help his shambling horde finish off the Skaven and was met with a Warp Lightning Cannon to the face, killing her. The GG smash through the fleeing Storm Vermin and cause 2 of 3 war machines to flee and kill the last on turn 6. The Clan Rats and Grey Seer survive to combat res kill the Black Coach.

The battle ended a Draw with only Grave Guard and a Corpse Cart "alive" for the Vampires, and 2 units Clan Rats, a Grey Seer, Gutter Runners, and a mortar alive for Skaven. Nice game Nik!
Posted by Rhellion at 7:28 AM