My first MWR is in the books, and I have to say that it was a blast. The drive was long but the games were excellent. I am looking forward to hopefully making the trip again next year. It's a great event to kick off the Summer GT season with loads of fun terrain, good scenarios, and quality players. Lets start off by having a look at my list. It was definitely something unique for me, as I have NEVER played a list with this much shooting. 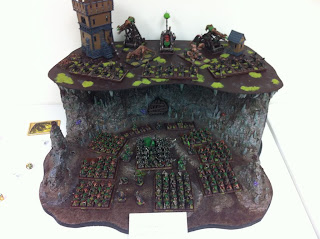 Lots of stuff, and LOADS more shooting than I ever take in my army lists. I figured this would be the event I would try out some new things in my Skaven build. Overall I was happy with the list changes I made, even though many of my things blew themselves up throughout the weekend. The whole idea of the list was magic and shooting, and the Aboms being the threats they always are. The slaves hold stuff up and allow me to shoot into them in close combat, and the other units are strictly relied upon as character bunkers. 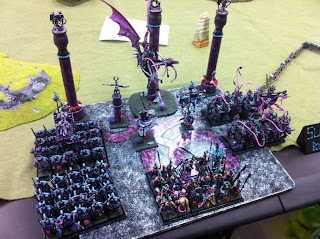 The Warriors were loaded up into 5 deployments at 3000 points! I knew I would seriously have to chip away at the heavily armored blocks. Good thing Skaven excel at chipping away at unkillable blocks. That is, until his Chosen rolled a 12 to start the game with a 4+ ward. That was excellent, haha. 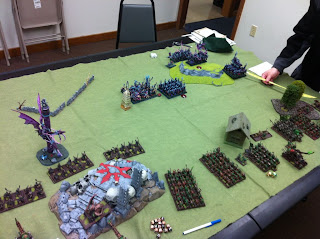 The scenario was Dawn Attack, and I decide I really wanted to kill his 750 point Sorcerer Lord on a Chaos Dragon. While most of my army was in the middle and ready to hold up the Warriors who rumbled forward, the Gutter Runners were able to swarm towards the lord as I made cannon pot shots. Where the cannon failed, the Gutter Runners succeeded in killing the dragon. I quick thinking Grey Seer was then able to turn around and 13th spell the lone wizard Lord to secure all of his vital points.

While this was going on,  I was mostly unsuccessful in doing any damage to the Warriors before they got to me. I was able to whittle them down so that when I cast the 13th spell on the Chosen on the 5th turn I was able to destroy them for the points. Dennis had also chopped away at my army getting some solid points until on the 6th turn I was able to kill his Sorcerer on a Disc with Gutter Runners. The last spell of the game I cast 13th on a 25 to finish his Warriors of Khorne, but he double 6'd the spell and we finished in a Draw, even though I has only killed 3 of his 5 deployments (2 of which were characters). 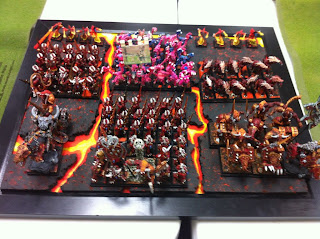 No greater daemon for Jim, he brough loads of Khorne units and heralds (including Skulltaker) to the party. He also had a Death Herald of Tzeentch hiding in the Horror block. The setup was Meeting Engagement, and my General was in reserve... luckily I went first and Jim failed to seize the initiative. 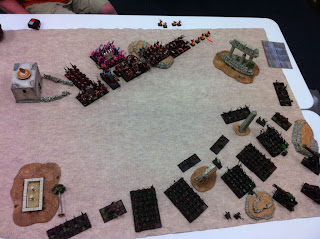 This game was more dictated by terrain than any of my others. On the lower right of my table side was an Arcane Ruin AND am Elven Waystone, so I was able to channel extra dice and also get +1 to channel on rolls if I was within range of one or the other. In addition to that, I think Jim was a little too timid in his gameplan. I had the Abominations, sure, but I didn't think I could really stand toe to toe with his Khorne blocks... and he didn't go all out at me until it was too late.

I was able to shoot and magic him to low numbers, and hold the Aboms in check (by charging my own Slave units to do impact hits, but stop him from moving too far forward) until I needed them later in the game. By the third turn I had almost destroyed the large Bloodletter block and wiped the Fleshhounds (losing my Aboms in the process) and was able to focus my magic and shooting to finish the rest sufficiently. Solid win. 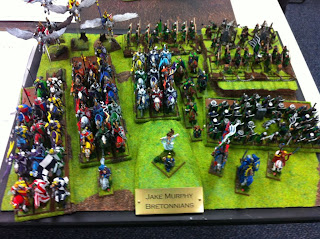 The bane of my tournament experience is Watchtower, and here it was again. Things were going SO WELL too, but the Skaven just could not hold it together. Early on, I was hoping to do some serious damage with war machine that ignore armor, but a WLC and the PCC blew up early. The small weapon teams did well though, and the Gutter Runners did their job (although slower than I would have liked).

Things took a turn for the desperate on the 4th turn when I irresistibly cast the third Wither on Jake's 40 man Men at Arms unit, completely wiping it out by reducing it to Toughness zero! This was the unit he was hoping to hold the tower with for the win. I held the tower with a big unit of Slaves led by a Grey Seer who only had to hold off an unmounted Knight charge. They were hexed by Heavens magic and had -1 LD as they lost the combat as expected, and failed their LD 6 break test, fleeing the tower. Not a problem as I hoped to move in next turn with Gutter Runners, who were much sturdier... until I rolled a 6 and the game ended, giving Jake the hard fought victory. 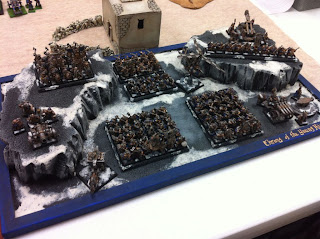 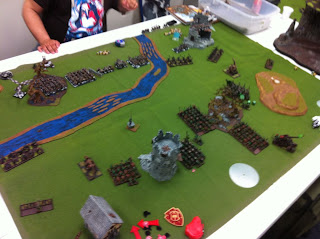 The Skaven were ready to snipe some Dwarfs in this match up, with a much more optimized list to kill stunties than my usual Tower list... which is easily handled by Dwarf artillery. My Gutter Runners again were outstanding, able to neutralize the Dwarf shooting and support units with a hail of amazing dice rolling and enough poison to wonder if they were Plague Monks under those black clothes.

A minor setback as a perfectly Skitterleaping Warlock was able to throw a Brass Orb on the anvil, and misdirected his toss 8 inches behind his own head! Gutter Runners were able to swarm the anvil late in the game, but it was almost too late as Miners came in and rear charged my General's bunker mid game and almost destroyed my battle lines. I was able to recover and pick off the rest of the Dwarfs with shooting and a solid Doomrocket, supported by the Hellpit Abomination on the left (as the right one was sniped by a flaming cannon). In the end only the General and BSB remained, and the Skaven were victorious. 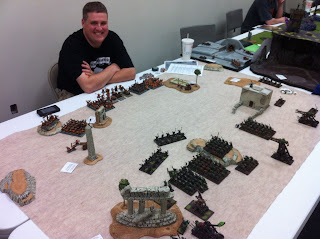 After our draw in the first round, they tried matching up Dennis and I in just about every game after. When the dust settled, Rob Phaneuf called me out at the judges table and I gladly accepted, knowing I was in for a fun game. Rob was running another solid Dwarf list with a little more close combat and a couple more war machines, but no anvil. I liked my chances even more in this game when he set up further back (as my army is not a combat monster by any means).

I was aggressive with my Scouting deployments, and was able to survive the opening barrage of his Organ Guns with the help of some good leadership rolls. I had made sure this game that as many of them as possible were within BSB range for the opening shots. The Gutter Runners were then able to get into position and take out the flaming cannon and the grudge thrower on the first turn, giving me some much needed breathing room.

As things progressed, the Skaven shooting was able to pick off the Dwarfs provoking more desperate action from the short guys, leading to the general charging out of his unit, failing his charge, and narrowly avoiding being turned into a Clanrat with the 13th spell... as well as later the remaining units making last ditch effort charges on the Hellpit Abominations who were given free reign of the board by the lack of artillery taken care of by the Gutter Runners. 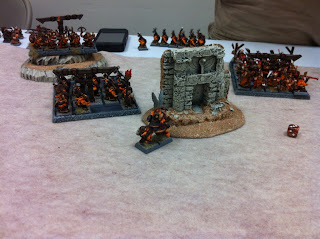 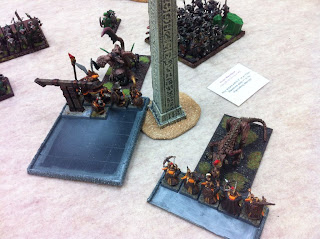 With the left flank totally controlled by Skaven, the Dwarfs had been moving the rest of their lines to better set up a counter attack. In the end there wasn't anything else they could do to recover, and the Skaven were victorious in destroying about half the Dwarf army and not losing much in return.


Overall I went 3-1-1 with a much stronger Day 2 showing, giving me enough of a surge to finish 6th overall at my first Midwest Rampage (and second GT ever). I was pretty happy with the results and hope to keep the Skaven train rolling right into Blood in the Sun and then Buckeye Battles in the coming months. Congratulations to Johnny Hastings on his Best Overall win with Beastmen!

and hoping to paint some Trollbloods... maybe...


Here are some more pictures of armies at the event as well! 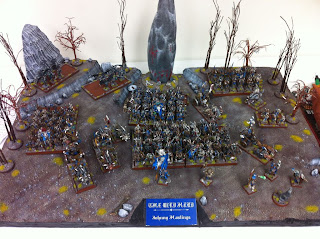 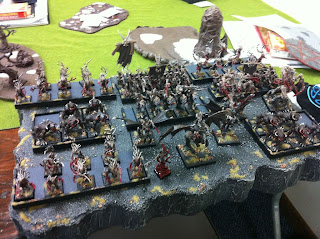 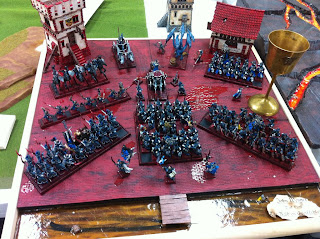 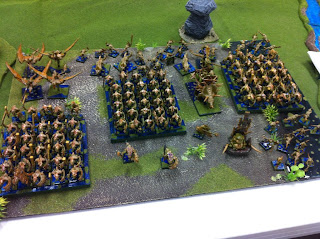 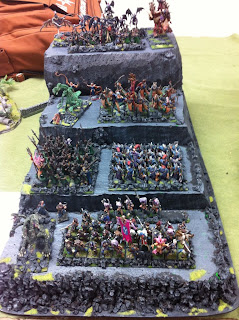 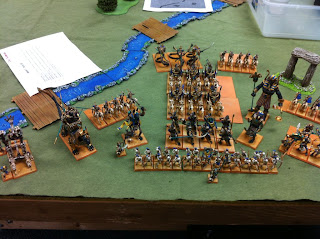 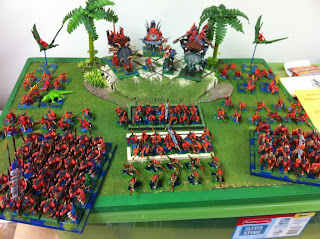 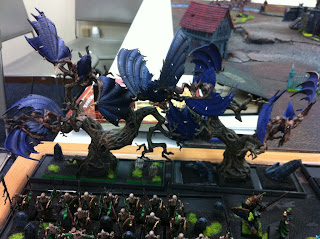