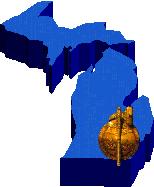 The 2012 Great Lakes Warhammer League is about ready to start, and I am running the Skaven again for the 3rd year. This is the second year 8th Edition rules have been in effect, so I expect a much better rules knowledge and overall stronger competition!

The GLWL is a Michigan-based Warhammer league that runs yearly starting in January. All across the state there are divisions of players that play 5 games for W/L/D points and victory point tiebreakers. The top 8 Division winners then meet up at the Season End Championship tournament in a special championship bracket and fight it out for the League Championship. This year there are 77 participants in the GLWL!!! I bet that number goes up even higher when the Lansing crew that is doing the Warhammer start-up league is more seasoned, next year.

This being my third season in the GLWL, I think it's time to really keep my eye on the prize. The first year, I won the Wayne Division but didn't make it into the championship bracket. The second year I fell short of qualifying for the League Championship, but won the Season End Tournament Championship. This year the goal is to win it all!

Here is the lineup for me this year in the Wayne Division:

A tough lineup indeed. Good luck to everyone participating in the 2012 GLWL!
Posted by Rhellion at 8:31 AM